Practical Information
How to Have a Great Holiday in Sardinia 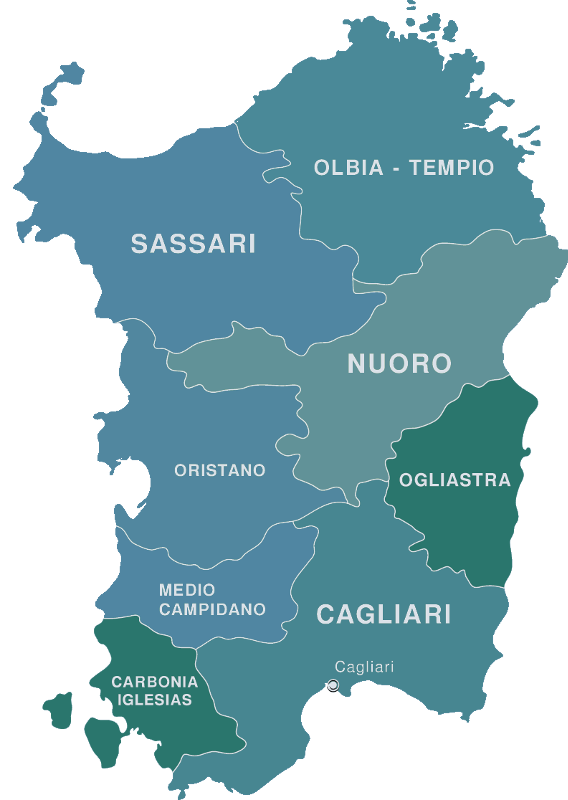 Sardinia is the second largest Italian island and is situated in the middle of the Mediterranean Sea. With over 1840 km of coastline, it is has Italy's longest coast. The Greeks called it Hyknusa or Ichnussa (Ιχνουσσα), from the Greek ichnos (footprint of the human foot) because of its resemblance to a large footprint. Sardinia, however, takes its name from the Latin Sardinia, as the Romans called it.

There are numerous historical and archaeological sites in the region including: Nuraghi (the most famous), menhirs, sacred wells, tombs of the giants and “Domus de Janas”. All of these make Sardinian scenery truly one of a kind.

Sardinia is also called “the other continent,” because it has been at the centre of Western civilization for millennia and is still remote, independent and timeless. Recently, a research team discovered that in the modern Sardinian population the DNA of ancient hunter and gatherer populations survives, which lived on the island 12 thousand years ago. This is an exceptional discovery that underlines the uniqueness of the genetic heritage of Sardinians, linked to the isolation that has lasted for millennia.

Many people consider Sardinia the “least Italian” among all the regions because of its geographical isolation. This has led to the development of very distinct native animal and vegetable species (such as the mouflon or the white donkey of the Asinara). It also has a very particular language and ancient traditions, which have remained intact over the centuries.

Interestingly, Sardinia is known as one of the 5 countries in the world with the highest number of centenarians, together with the village Loma Linda (in California), the peninsula of Nicoya (in Costa Rica), the island of Ikaria (in Greece) and Okinawa (in Japan). There's no definitive answer why this is, however, some scientists believe that the secret lies in the genetics, daily diet, and special way of life in these areas.

Contact us at NxtStop Sardinia for further information about Sardinia

Why Holiday in Sardinia?

How to Travel to Sardinia

Holidaying in Sardinia is very easy. Cagliari Elmas Airport is the main international gateway to Sardinia, it is connected to most major European destinations.

It serves the south of Sardinia and tourist destinations in South West such as Carloforte, Iglesias, The Costa Verde, Carbonia and Sant’Antioco.

How long is the flight to Cagliari?

Which airlines fly to Cagliari?

Ryanair (from Stansted) flies the most to Cagliari (check the official website for the schedule).

Alitalia flies from Heathrow and LCY London City but flights are not direct, and there is usually a stop-over in Milan or Rome (check the official website for the schedule).

Alternatively you can travel from the UK to Sardinia by car.

After arriving to France from the English Channel there are many routes available from France and Italy to reach Sardinia:

Once in the north of Sardinia you can quickly drive to Cagliari.

Driving in a car is the best way to travel in Sardinia and will allow you to explore the island. You will be able to discover the spectacular beaches and coves, experience the diverse scenery and views and visit some of the towns, villages and historical sites. There are no motorways in Sardinia but there are A roads connecting the major cities together.

Cagliari Airport (CAG) is located just over 10 km (6 miles) from the city centre. There are car hire companies on site at Elmas airport including: Avis, Europcar, Hertz, Goldcar Rental SP. These have counters conveniently located within the arrivals section of the airport. It is best to hire a car before arriving in Cagliari especially in the summer months.

On average a car hire in Cagliari costs £25 per day.

Filling up a tank of fuel costs between £45 and £60, depending on the car size.

Can I drive to Italy on a UK driving license after Brexit?

From 1 January, most UK drivers will still be able to use their normal driving licence to drive in EU countries. There are some exceptions and you may need to purchase an International Driving Permit (IDP can be bought at Post Offices for £5.50). These exceptions are for people who only have a paper licence, not a photocard one, as well as those with licences issued in Gibraltar, Guernsey, Jersey or the Isle of Man.

Here some Campidanese handy words to use on your next trip to Sardinia:

The most famous Sardinian words by far are eja and ajò:
eja means “yes” and ajò means “come on” or “let's go”.

How are you?: coment' istais?

Sardinia boasts a beautifully warm Mediterranean climate with long, hot summers and coastal temperatures averaging 28.5°C (83.3°F) in July and August. The island is renowned for its 'six-month summer', and the sea is often warm enough for swimming from May until October.

July is the month with the least rainfall. Rain falls for 0.8 days and accumulates 4.1mm (0.16") of precipitation. July also has the most sunshine of the year.

What month has the most sunshine in Sardinia?

Don’t take sand, pebble and shell from Sardinia (If you take anything on an airplane, scanners will see these. The sand will be confiscated and you will get a hefty fine).

Pick up your litter and beware of plastic objects and cigarette butts. These are death traps for many marine animals (plastic bottles, bags, plates and cups take 100 to 1000 years to degrade).

Don’t light fires. In Sardinia the summer is very dry and therefore very susceptible to fire. So it is forbidden to light fires, even for cooking purpose, if not in a dedicated picnic area.

For the most up-to-date travel advice including information on safety, security and health, local rules and currency, please visit 'Travel Aware' and the 'Foreign travel Advice' Government website.

Keep in mind that advice can change at any time, so check regularly for updates.

If you have any questions about Holidays in Sardinia, Cagliari and South West Sardinia, please don't hesitate to get in touch with us at NxtStop Sardinia