Porto Paglia Beach (the most popular of the Gulf of Gonnesa)

Porto Paglia beach is one of the four beaches that form the Gulf of Gonnesa.

The beach takes its name from the ancient tonnara (tuna fishery), dating back to the 18th century, which for two centuries was one of the most productive in the Mediterranean. The tuna fishermen's houses and the fishing dock have been renovated and converted into residence and holiday homes.

Not far from the tonnara (tuna fishery), you can see a small fisherman house, built among the rocks and accessible at low tide. It is very attractive and the only one in Sardinia accessible from the sea. Along the path, not far away, you can also reach the remains of a Spanish tower (shoes may be needed for walking on the rocks).

The car park is subject to a parking fee. At Porto Paglia beach you can find a refreshment point directly on the beach which also offers the possibility of renting sun umbrellas and sunbeds.

From Iglesias or Gonnesa, take route 126 and then panoramic route 108 towards Portoscuso, along which you will find the diversions to the village of Porto Paglia. 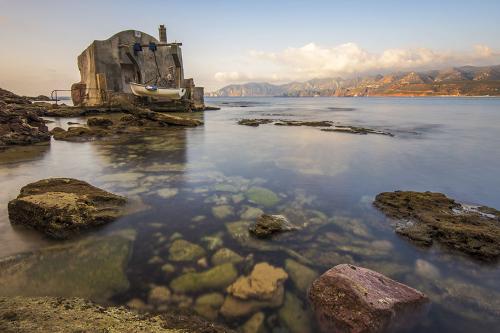 For further information about booking a bespoke tour holiday in Sardinia, please get in touch with us at NxtStop Sardinia.